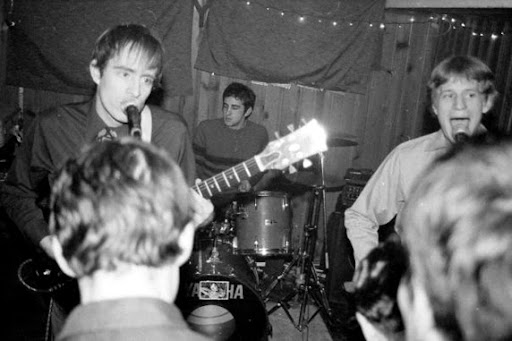 [Although this album was not recorded or produced in South Bend (the band was based out of DC at the time), I doubt anyone will mind too much that we are featuring it here.]

How does one articulate the impact and significance to the Notre Dame scene of a record such as Chisel's 8 a.m. All Day? A record that was the soundtrack for so many road trips, the impetus for spontaneous kitchen sing-alongs, whose songs we knew from live sets played in South Bend basements well before they were ever put to tape. This was our local boys making good with a hot album, the first breakout LP from the SBP90s era.

Even after a couple years of doing this blog, though, I'm still not sure I'd ever be able to write up 8 a.m. All Day and do it proper justice. Besides, the DCist did a fairly decent job of that not too long ago anyway. So instead of just awkwardly gushing on for awhile, I think we'll approach this one a little differently. The first thing we'd like to do is share a pretty fantastic article that Jeff Jotz (Oatmeal, Water) penned back in 1996, and was kind enough to send our way (thanks, Jeff!). The second thing we'll get to after the review, so please read on…

I first saw Ted Leo and John Dugan play together in my dormitory basement at the University of Notre Dame in 1990. Fisher Hall’s basement boasted a dirt floor and extraordinarily thick concrete walls which killed sound at the basement doors. The dorm was built in the early 1950s, so perhaps the Holy Cross Brothers, fighting the good Cold War fight against the godless Red Menace, designed a bomb-proof shelter in the dorm’s basement to protect the Notre Dame students from the hydrogen bombs hanging over the country’s collective head.

The two wailed and raged down there, with Leo blistering away on guitar in this frantic, uptighty playing style, like he was stiffening up with rigid convulsions. Dugan lazily bounced around the drums, seemingly unaware at the ear-piercing noise resonating off the concrete walls around him. The two did some an energetic cover of Mission of Burma’s “Academy Fight Song” and interpreted their favorite Wire and Mudhoney songs. By the time the two graduated in 1993, they changed bassists and seemed all the rage at a college more known for its football players and wholesome Catholic youth than some music scene. Two years ago the band relocated from South Bend, Indiana to the more friendly frontier of Washington, D.C., where their audience grew beyond the occasional beer blast.

It’s odd writing an uplifting article on the three lads who make up Chisel after watching them evolve from two (later three) guys rooted in political punk, British pop, avant-garde noise rock and standard NYC and DC hardcore to their current and most productive period as innocent harbingers of the mod re-revolution after I watched hours of TV or stumbled around in drunken glory with them. Without a doubt, I knew that this was going to be more than my average music article.

Chisel, made up of Leo, Dugan and bassist/vocalist Chris Norborg (who is a former member of the Notre Dame Glee Club and was recruited by the band in 1992), has a new album out, 8 a.m. All Day (Gern Blandsten). In the past two years, Chisel has refined its sound to the point where many listeners pin the band with the “mod” label. I refrained from including some blatant Who/Jam parallels here, maybe throwing in some reviewer’s interpretation of The Who’s performance at a 1966 show as a creative twist normally found in the higher-brained and more witty music writers. To categorize Chisel strictly with a musical and fashion movement that was always over before it began limits the band’s influences and belittles the new paths it has been forging both on stage and in the studio. All I can say for sure was that I ran into Leo at the Who concert at Giants Stadium in 1989. We all have our guilty pleasures, so nobody can knock Chisel to be Johnny-come-latelies to the Who kick.

“Yeah, the Mod comparison is undeniable,” said Leo, who admits viewing the Jam video “A Town Called Malice” on MTV fifteen years ago has impacted on his musical tastes ever since. “I won’t deny that we enjoy the looks and the sound. However when you do look a certain way perhaps other aspects of the band get overlooked.” He credits his biggest songwriting and guitar influence not the obvious -- Pete Townshend of The Who and Paul Weller of The Jam -- but Steve Marriott, lead singer and guitarist for the Small Faces, a mid-60s British band who were contemporaries of The Who and who never moved beyond cult status in the States.

Leo said that coming of musical age among the anarchistic obstinance of New York’s varied hardcore scene in the mid-1980s emboldened him with what he calls “that punk energy and ethic,” adding “Hardcore in New York was always a bit crazier and insane than other scenes. It carries over to my performance, in contrast with all those indie rock shoegazers.” The 25-year-old native of Bloomfield, New Jersey comes across offstage as a latent Dick Vitale, quietly mellow with occasional outbursts of emotion. Onstage, he assumes the identity of a nerdy Mr. Hyde, his jerky energy and absorbing guitar resonating in nervous fits and starts.

“The mod shift wasn’t a calculated thing,” said Dugan, a D.C.-area native who was weaned on the sounds of local legends Fugazi and Rites of Spring. “We figured what we liked in our songwriting and channeled it. There was no ‘defining moment’ for our new direction. The Jam comparison has been so overstated. While it’s a flattering comparison, I don’t hear it so much in our music.” 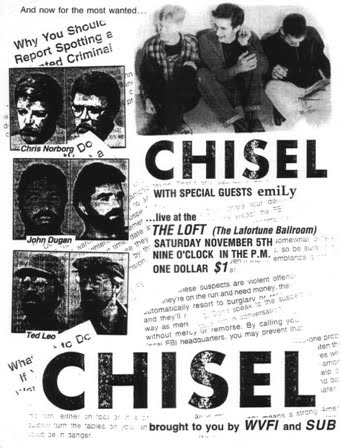 The trio’s new album -- the band boasts four singles, four appearances on compilation records and a 1995 EP/CD -- takes the listener on a slam-bang rocket trip through many styles of music, from mid-60s British and American garage punk of the same era to the hyperactive indie punk of contemporaries Superchunk. Yeah, you can hear Who-type bass lines in one song and perhaps a self-conscious guitar nod to Paul Weller in another, but the line is drawn there. The three successfully weave a variety of their respective music experiences in a powerful yet never overwhelming album. Hyperactive at times to make you think you’ve had too many cups of coffee, Chisel does not drift through their songs aimlessly without direction. They make their point and make a bee line to deliver quickly, as if the three are trying to beat each other to the end of each song. It works marvelously.

Chisel recently wrapped up a Midwest tour with fellow Washingtonians Fugazi and Lungfish -- Fugazi’s Guy Picciotto is a big fan of the band -- and play quite often in our nation’s capital and in New York City.

My picks? Try the slowly-bouncing tale of Leo’s journeys in “Citizen of Venus,” the paced and singalong rhythms of “Breaking Up With Myself,” and the CD’s title track, which really highlights the cool vocal games of Leo and Norborg.

So save your parkas, bowling shoes and Vespa scooters for the reruns of The Young Ones. Chisel is one of the few bands which proudly flaunts its musical influences while being individual enough to stand out even more distinctly among the pack of bandwagon bands who trace their roots to the first time they heard “Smells Like Teen Spirit.” What’s certain is if the Who ever reunites again for some big rock concert, Leo, Dugan and Norborg will be there having a dilly of a time with ol’ Pete, Roger and John.


*****
For the second part of this we're going to put it on y'all a little. Faithful readers of the SBP90s blog, former ND rockers, casual visitors from across the internet… what did this beloved Chisel album mean to you? Contribute to the comments section and share your memories, stories, and enthusiasm for Chisel and 8 a.m. All Day. 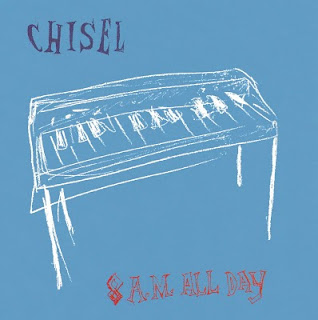 [sorry, no free download. if you regularly read this blog and don't already own this --- shame on you. go buy it now!]

see also:
Chisel on MySpace
more Chisel on SBP90s
Posted by theodore at 11:26 AM 6 comments: